Simon Mwewa has angered Macky2 and other Zambian artists over demeaning comments.

Apparently Simon Mwewa heard a story that a Zambian artist was paid 30,000 USD by the government in exchange for their silence. 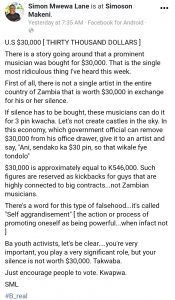 Unfortunately, Simon Mwewa’s comments have been met with a lot of backlash from the Zambian artists and the general public.

Macky 2, responded by telling Simon to mind the way he talks about musicians before “he loses his respect.”

In fact, Macky 2 and Simon have had a little back and forth on social media.

More artists have spoken up against Simon to the extent he felt the need to clarify his earlier comments.

“In no way did I imply or suggest that a musicians craft isn’t worth huge amounts of money.

I wasn’t talking about their talent. I was basically saying if an artist’s silence was to be bought…..$30,000 wouldn’t be the amount to be offered.

Simply because in this economy $30,000 to silence a single artist is both unattainable and unsustainable.”

However, he still went on to mock artists more by saying when seer one called Zambians poor no one seemed to mind, but when he mentioned 3000 kwacha all hell broke loose. 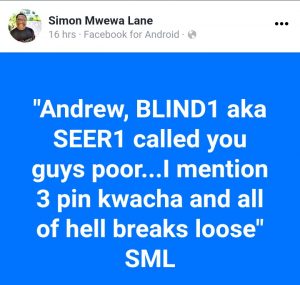