B Flow has turned down government invitation to attend youth engagement meetings which will be hosted by the ministry of youth.

Zambian singer B Flow has been having a few heated weeks with the government.

In case you haven’t been keeping up, here’s a quick rundown.

B flow posted a video to his social media calling out the Zambian government for the oppression going on in the country.

This prompted the minister of Lusaka Bowman Lusambo to give him 24 hrs to apologize. B flow refused to apologize for much to the admiration of many Zambian youths and fellow celebrities.

Shortly after, pictures of him being cordial with Bowman Lusambo surfaced online. This led to many people assuming he had been bought off to keep quiet.

However, B flow denied the claims and said the reason he met Lusambo was that he went to the statehouse to deliver a letter, seeking an audience with the president.

Now, B Flow has been invited to a youth engagement meeting which will be hosted by the ministry of youth.

The ministry has called on youths to attend the meeting and share their concerns with the government.

However, B flow has turned down the invitation by the government.

The singer ended his post by assuring his fans that he will not allow himself to fall into another trap. 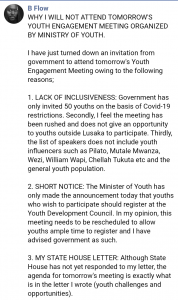